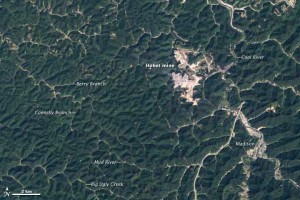 1980s
In 1986 WVHC successfully organized local opposition to the expansion of a 2,000 acre acid producing strip mine in Upshur County in central WV. The expansion would have included a 1-mile long valley fill in the headwaters of a native brook trout stream and a 90 foot high dam across a farm field in the watershed below. A settlement agreement in a separate 1988 litigation against the state of WV resulted in significant, though short-lived, improvements in reclamation and the stability of fills at huge strip mines.

1990s
In the early 1990’s requirements of the Clean Air Act as well as costly water treatment liabilities in the northern, higher sulfur, acid prone coalfields of WV, caused mining to shift to the southern coalfields. At the same time, tax credits enabled industry to invest in new technology and bigger machinery. Other financial incentives encouraged mining the thinner seams of coal that are layered in the southern mountains and are more difficult to mine. Mountaintop removal expanded beyond all expectations. During the ‘90’s WVHC played a key role in laying the groundwork for the growing opposition to mountaintop removal mining and in convincing regulatory agencies of the significance and overall impact of the ever-increasing number and size of fills being permitted. WVHC members participated in and reported on state sponsored mine tours, were appointed to legislative committees established to review state policies of mitigating for streams buried under valley fills, and wrote articles describing the practice and the convoluted permitting process. Members also participated in many public and media forums and debates with government and industry representatives. Appointed to the governor’s task force on mountaintop removal mining in 1998, WVHC offered a minority report that pointed to the illegality of filling streams and to the environmental and economic harm caused by mountaintop removal mining. In 1997 we compiled the first map visually documenting the extent of stream loss from mountaintop removal and valley fills in the three county area of Boone, Logan and Mingo in southern West Virginia.

A major and only organizational plaintiff in the 1998 Bragg v Robertson litigation, WVHC was instrumental in convincing EPA to conduct the first ever Environmental Impact Study (EIS) on the effects of mountaintop removal mining and valley fills with the intent of finding ways to reduce the impact of those activities. Although the politically tainted recommendations of the final 2005 EIS called instead for streamlining the permitting process, the scientific studies contained in the report have been invaluable as some of the first official documentation of the deleterious impacts of mountaintp removal mining and valley fills. Few permits were issued while the EIS was being prepared.

2000s
The Conservancy continues its vigorous opposition to this environmentally destructive method of mining by engaging with others in litigation, education, actions, publicity and research. WVHC joined OVEC, CRMW and the Appalachian Center (now aka Appalachian Mountain Advocates) in comments objecting to over 40 inadequate industry applications to the Army Corps of Engineers for 404 fill permits and is currently a co-plaintiff in legal action opposing the Corps’ illegal permitting of large-scale mines without the required scientific study and review. We are also working with groups to oppose weakening amendments to environmental law, and are supporting local and regional community efforts to inform the nation and world of the travesty of justice called mountaintop removal.

2010s
Delays were many; efforts to tighten permits and strengthen regulations were partially successful; but denials were few and the practice of Mountaintop Removal, though somewhat reduced, has continued and other large scale mining is being permitted.   Ongoing health impacts to nearby communities remain unaddressed and are for the most part ignored.

A major feature and legacy of this mining has been degradation of hundreds of streams by selenium pollution and ionic stress that degrade the water quality and harm aquatic life in once healthy thriving headwater streams.  Our legal efforts since 2010 have focused on these water issues.  Represented by Appalachian Mountain Advocates, the Conservancy and our co-Plaintiffs have won court decisions that hold mining companies responsible for expensive and extensive treatment of many of these polluting discharges and for making additional payments to independent land protection organizations boosting their efforts to preserve and protect properties especially in watersheds harmed by MTR where possible.