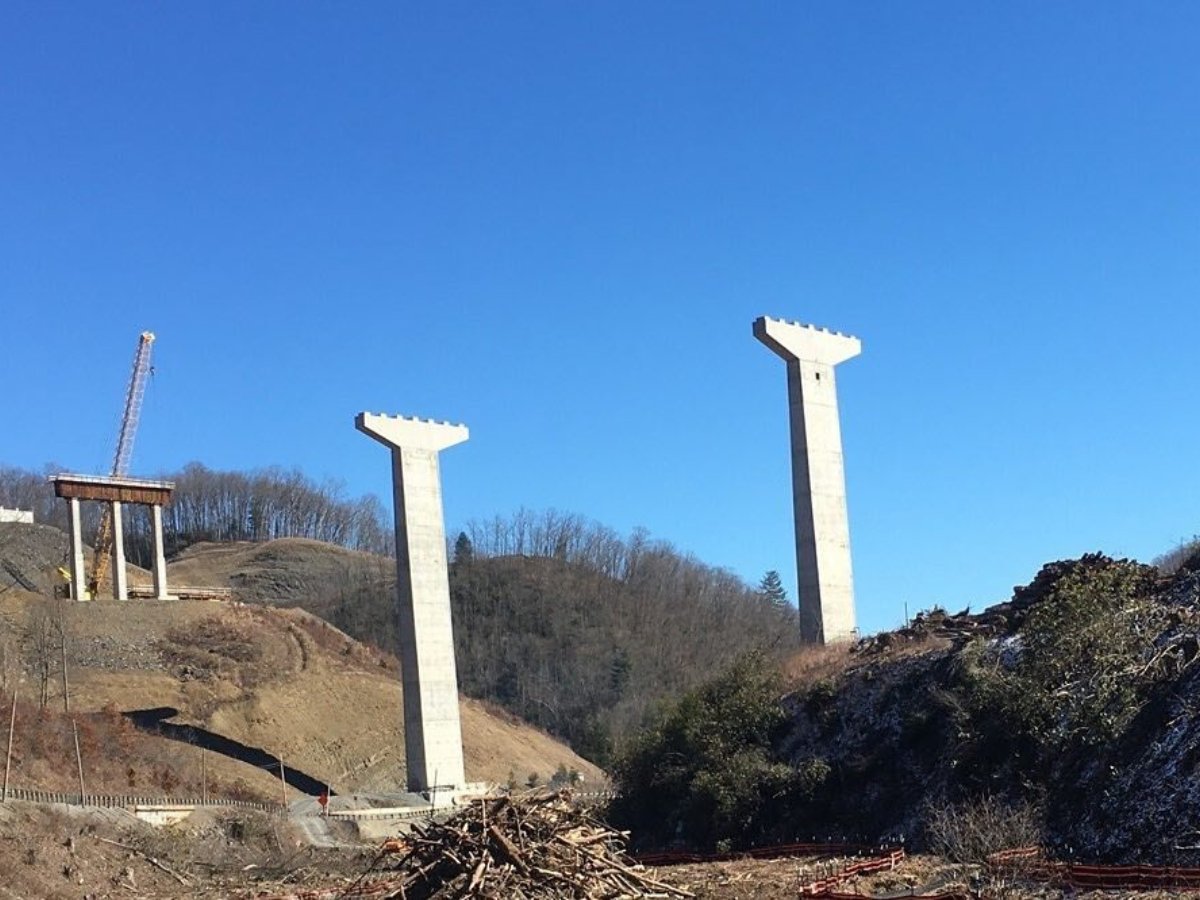 So for the September inning, manager-editor John McFerrin sent himself to the plate. With “Corridor H for Dummies,” he gave readers history and context for the current dispute.

Why did we take on this fight in the first place? John quoted David Elkinton’s book on the first forty years of the Highlands Conservancy. He wrote that from the beginning, we “questioned the basic need” for a four-lane highway on new location tearing through the highlands. Damage was inevitable. And so it has been.

You can see the damage happening right now, as construction continues (five years and counting) on the Kerens-to-Parsons section. From your car, it’s visible along US 219 south of, and WV 72 just north of Parsons.

In late October I hiked with friends on the South Haddix Trail, now interrupted by the highway. A tributary of South Haddix Run had been dammed by the road. Below, we could see a series of sediment catchment ponds, obviously filled with the grit that blankets the stream bottom that ruins the habitat for fish. Every time it rains, South Haddix becomes Mud Run. Another rare trout stream abolished.

From a high point above the run, looking east along the huge cut we could see the triple pier of the bridge designed to cross Haddix Run and US 219. The assembly has been slipping downhill. Whom to blame for the blunder is the subject of litigation between the contractor, Kokosing, and the Division of Highways (WVDOH). Meanwhile, attempted remediation continues. Another bridge-building blunder closer to Elkins wasn’t discovered until the highway had been open for several years. It’s being fixed—we hope—during a two-year detour.

WVDOH considers such mistakes exceptional. Damage to the environment, though, is taken for granted, handled with paltry fines and paper promises to do better. We saw it along Beaver Creek as the highway extended toward Davis; now we see it on formerly-pristine streams in the National Forest; soon we’re likely to see it on the main stem of the Cheat. As with mines and pipelines, so with highways: the toll shows up in the water. Later, we measure the loss of forest, wetlands, wildlife habitat, and more.

All this was foreseen, as Dave Elkinton wrote, fifty years ago. And sued over, twenty-five years after that. Now, after a settlement agreement following our partial victory in the federal court of appeals, our position is somewhat different.

Although Transportation Secretary Jimmy Wriston told legislative committees in Charleston and Washington that we are just a little pack of enviros who want to delay the project again, we find ourselves in company with a large majority of businesses in both Thomas and Davis who want a better route that would serve both towns and protect the Blackwater River area. As members of the Tucker County Chamber of Commerce, they participated in a survey on prospective routes for Corridor H. Respondents favored the northern route over the WVDOH alignment, three to one.

Our allies don’t want any more delay. They know, however, that the Parsons-to-Davis section comes last, in part, because it’s the most difficult section to build.

WVDOH’s contractors have been busy since 2000 building from east to west, five sections from Wardensville to Baker, to Moorefield, to Forman, to Bismarck, to Davis, and then picking up where they had left off north of Elkins. Now, they’re counting down to the end. Let us get ‘er done, they say, or the money will go away. The town councils have shied away from seeking any changes.

At a show-and-tell in September, WVDOH and Federal Highway Administration officials conceded that funding will be there, “available until obligated.” Still, Davis Mayor Al Tomson says he’d rather have “the bird in the hand.”

But how much more time would it take to do it right? According to the Briefing Statement agreed on by the parties to the Settlement Agreement, “If a prudent and feasible alternative route were found, the new route would have to be developed. Estimated time for the various studies is 18 months.” That estimate was made before the EIS process was streamlined. Compare it with the lifespan of a bad alignment—well into the next century.

At the presentation on Sept. 12, WVDOH showed a new plan for their Truck Route, an add-on to cope with the failure of their preferred alignment to do anything about truck traffic through Thomas. If you’ve ever been there, you’ll know the problems with safety, noise, and wear-and-tear.

Now the engineers propose to designate the two-lane Truck Route as WV 32—the main street through Thomas would become Business 32. They hope the bypass will attract vehicles traveling to or from Pittsburgh/Cumberland/Oakland. In this scheme, Thomas traffic will have to turn across oncoming vehicles to get on or off 32. One safety problem would be solved by creating two more. And all the trucks that take the bypass would still have to use 32 between the towns in order to reach Corridor H.

Wrestling with this issue, the highway planners have shown the feasibility and relative advantages of the northern route. Their bypass would go halfway, intersecting US 219 north of Thomas. Completing the bypass as the Corridor, connecting it on the east with the completed section near Davis, and on the west with US 219 near Benbush, would separate local and tourist traffic from long-distance trucks.

WVDOH’s justifications for the highway begin with this statement of “Purpose and Need”: “To improve east-west transportation, to promote economic development in the region, and to preserve or improve quality of life.”

In the drive to get ‘er done, they are focused on point one, ignoring the equally important points two and three. They claim that completion of the Kerens-to-Parsons section with the bridge over the Cheat River will immediately escalate east-west traffic.

More wrecks! More trucks! No time to reconsider an alternative they dismissed (even though it had fewer environmental impacts) fifteen years ago.

They don’t look at the actual economy that has developed in that period. The number of businesses in Davis and Thomas has doubled. The attractions, tangible and intangible, that those businesses depend on would be undermined by a destructive highway project. So would the quality of life for residents, visitors, and the visitors who become residents. We conceded years ago that the Corridor would be built in some form. What a shame if it turned out to be as bad as we feared.