Off-highway Vehicles: a Threat to Our Public Lands

Public lands provide significant benefits to the public, our environment, and our economy. Our West Virginia public lands, including our state forests and parks as well as our national forests are experiencing record-high visitations and therefore are facing threats like never before. In fact, reports from all over the country are telling the same story.  To [...]

Who Gets Stuck When Mines Fail?

There has been another development as we inch forward to a solution to the problem of how to reclaim failing mines.  The West Virginia Highlands Conservancy, the Sierra Club, and the Ohio Valley Environmental Coalition have sued the federal Office of Surface Mining to force it to be more active in the search for a solution. [...]

A tribute by Dave Elkinton One of the key founders of the West Virginia Highlands Conservancy, Lou Greathouse, passed away November 24, 2019 in Roswell, Georgia at the age of 88. According to his obituary, Lovell Ridgeley Greathouse was born on February 19, 1931, in Strasburg, Virginia. He was a graduate of West Virginia University. [...]

By John McFerrin Congress is considering two bills--the Revitalizing the Economy of Coal Communities by Leveraging Local Activities and Investing More (RECLAIM) Act and the Abandoned Mine Land Fee Extension Act—that would change the way we spend money on mine sites that were mined before the Surface Mining Control and Reclamation Act passed in 1977.             When the federal Surface Mining [...]

By Marion Harless          Wisconsin’s Senator Gaylord Nelson thought it would be wonderful to have a student led teach-in on the environment at the nation’s colleges and universities.  He put together a packet of environmental information and organizational aspects, made it available to interested schools and named Dennis Hayes as his lead student.  Dennis is still working at [...]

As if widespread drought, mass extinctions, more severe storms, etc. were not sufficient cause for concern, a study by Duke University recently reported that the concentrations of carbon dioxide that lead to climate change also cause poison ivy to become more prolific.  The effect on poison ivy is greater than that on other woody species.  The increased [...]

By the Pricking of My Thumbs, Something Wicked This Way Comes

The 2021 session of the West Virginia Legislature provided a lot of indications of the enthusiasm in the body for allowing off-road vehicles on public lands in West Virginia.  There were eight bills introduced that would allow or encourage such activity.  In addition there were two resolutions.        None of the bills passed.  That there were so many introduced [...] 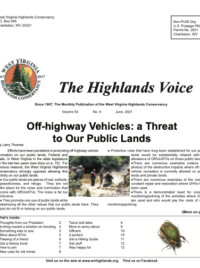