By Hugh Rogers          An elected official in Tucker County asked me where I was from. “Randolph County,” I said. “Kerens.” “Off the mountain,” she said. I nodded. Then she told me she’d heard that opposition to Corridor H, beginning years ago, was all from “out of state people.” After letting this sink in, she said, [...]

Another incredibly challenging year has come to an end. Looking back, I have been thinking, where did it go, seems to have just zoomed by. Unfortunately, the Covid19 pandemic, now with even another variant, continues its successful quest to radically change the way we live our lives.  The Conservancy’s many accomplishments, as well as many [...]

By Cory Chase On November 12, I had the pleasure of interviewing Nicolas (Nico) Zégre, PhD, about climate change and the future of WV’s water. Nicolas is an associate professor of forest hydrology and director of the West Virginia University Mountain Hydrology Laboratory (MHL). This lab “focus[es] on aspects of water resources with a particular [...]

The West Virginia Highlands Conservancy very much appreciates the generous bequest received from the Estate of Lawrence Woodward “Luke” Franzheim, III of Springfield, Ohio, formerly of Wheeling, West Virginia. Among Mr. Franzheim’s many passions in his life was nature conservation. Above all, he embraced the spirit of “Wild and Wonderful West Virginia” and was most [...]

Senator Manchin Voices Opposition to the Build Back Better Act

By Perry Bryant             On December 19th, on Fox News of all places, Senator Manchin said that he could not support moving the Build Back Better Act forward. The Build Back Better (BBB) Act is President Biden’s proposal to expand the nation’s social safety net and make historic investments in efforts to address the climate crisis. [...]

The First Season of Dolly Sods Wilderness Stewards Part 2: Dolly Sods Becomes a Wilderness By Dave Johnston In the first part of this article (The Highlands Voice, December, 2081), which is based on the presentation I made at the WVHC Fall Review, we looked at the provisions of the Wilderness Act of 1964 as they [...]

Carbon Capture and Storage Is Not a Silver Bullet, But…

On April 15, 1907, President Theodore Roosevelt, issued an "Arbor Day Proclamation to the School Children of the United States,” telling them: It is well that you should celebrate your Arbor Day thoughtfully, for within your lifetimes the Nation’s need of trees will become serious. We of an older generation can get along with what we [...]

Franklin (Frank) D. Young of Ripley, WV, died Thursday, Dec. 2, 2021 at the Hubbard Hospice House in Charleston, WV. He was born at Tuppers Creek, in Kanawha County, WV, the son of Lewis Otho Young II and Lena Mae Young.  Frank had been the owner of Red Barn Tire and Wrecker Service, near Ripley, [...]

By Cynthia Ellis Frank Young seemed brilliant to me.  But he would not have agreed.  Still, when we gathered with him and other members of the Board of Directors of the West Virginia Highlands Conservancy, he stood out as someone who admirably understood a great many complicated issues and often had something pertinent to say.   We were accustomed [...]

By Marilyn Shoenfeld I have known Frank and Becky for at least 23 years, or as long as I have been on the Board of the WVHC.  My husband, Peter Shoenfeld (dec'd), became friends with Frank when WVHC was opposing the Backbone Mountain Wind Project in Tucker County. This was in the late 1990's when [...]

By George Beetham Frank Young was president of the West Virginia Highlands Conservancy when I got involved in the wind issue. I contacted the Conservancy over the the Nedpower project along the Allegheny Front. I was concerned because the initial proposal called for turbines extending southward to scenic Stack Rock about half a mile north [...]

*You have always been such a stable, thoughtful, reasonable personal friend, and foundation stone for so much that WVHC and other civic and environmental groups in WV have sought to do.  We already miss you.  We honor you. We pray that all of us, and especially your family, will grow beyond the grief that will be is felt when now that you leave you have [...]

Something Useful from Acid Mine Drainage: Is that Possible?

By John McFerrin One type of materials that is necessary for modern life is a class of minerals known as rare earth elements.  These elements are necessary components of modern technologies. They are used in cellular phones, computers, televisions, magnets, batteries, catalytic converters, defense applications and many more things that make modern life possible.  Now researchers at [...] 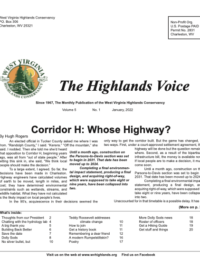