By John McFerrin             The Federal Energy Regulatory Commission (FERC) has approved a change in the construction method that the Mountain Valley Pipeline (MVP) will use to cross many of the streams and wetlands in its path.             The change is from what is called “open trench” to “trenchless” crossings.  This means that MVP had planned to cross [...]

Throughout April, Old Man Winter still wasn’t quite ready to leave the highlands. We have had snow, heavy winds and freezing temperatures that have continued to do some damage. Even so, the signs of spring are everywhere. Trees are greening and mammals who have been sleeping during the long winter have reappeared and are scurrying [...]

By Dave Johnston In the first five parts of this article, which is based on the presentation I made at the WVHC Fall Review, we looked at the provisions of the Wilderness Act of 1964 as they relate to the values of “wilderness character”, the history of Dolly Sods as a wilderness, and the impacts [...]

Who you gonna believe—me, or your lyin’ eyes?

By Hugh Rogers             In the last week of April, the Thomas City Council met to hear from the state Division of Highways (DOH) on their plans for Corridor H. The buzz about an alternative route had been growing louder. “Go North,” it said—reminiscent of another campaign more than thirty years ago. That campaign had worked. [...]

A vision of trophy wild brook trout in WV

By Mark Taylor  Dustin Wichterman has always been connected to the wilds of West Virginia. He spent his youth traipsing through the Mountain State’s woods and waters. Fishing. Hunting. Foraging ramps and wild mushrooms. Being a mountain kid.   It was great, but even as a youngster Wichterman knew things weren’t perfect, his adventures taking place among [...]

Immature fruits as well as the vegetative structures of Mayapple are poisonous.  As with many drugs, there is a fine line between poison and effective medicinal use. American Indians ate the ripe fruits and used a number of medicinal Mayapple preparations. The list of uses by American Indian include treatments for rheumatism, as a laxative as [...]

Mayflies have been around for some 350 million years. This means that they existed even before the dinosaurs came to existence and they survived extinction event that wiped out the dinosaurs.Nymphs are aquatic and that live under water for nearly 2 to 3 years. During this time, they undergo about 20 or transformation phases.Adult Mayflies [...]

A Little Elaboration and Clarification

By John McFerrin             The March, 2022, issue of The Highlands Voice included a story about geothermal energy and its potential as a source of electricity in West Virginia.  Since then, I have heard from readers pointing out ways in which it was inaccurate or incomplete.  While not fake news, there were things in the story which could use some [...]

By John McFerrin The Central Appalachian Spruce Restoration Initiative (CASRI) is an ecosystem restoration organization, focusing upon restoration of Red Spruce ecosystems. Katy Barlow and Todd Miller made a presentation at the 2021 Fall Review.  They both work for The Nature Conservancy and are assigned to CASRI. CASRI is a cooperative venture among about fifteen groups, [...]

By Cindy Ellis The accurate name for a singular bird is “Common Loon,” but that fascinating flyer is not often seen by many here in West Virginia.  Most sightings have been recorded during spring and fall migration.  In late April, one lucky/unlucky loon found itself in a tricky situation at Hinkle Lake near Bridgeport in [...]

Woodsman, Spare the Tree! (especially the old ones)

As described in the story on page 2, President Biden has issued an Order urging that we preserve and protect our forests, particularly old growth forests: Despite their importance, the world’s forests are quickly disappearing; only a small fraction of the world’s mature and old-growth forests remains.  Here at home, the primary threats to forests, including [...]

“Utility-Scale Solar – a Revolution in Progress.” Large solar panel installations that can connect to the electric power grid are proliferating across America. Plans to site these “utility-scale solar” installations in Appalachia, including on previously mined lands, have captured public attention.  What does this revolution in clean energy production mean for our society?  What can we expect [...]

By Allen Johnson This pictureis of a young bear that entered  our chicken coop in August, 2020. I shot it at the command of a WVDNR game warden who otherwise would have to do it himself. Several nights earlier a then-unknown predator had broken the outside of our coop enough to get in and eat two [...]

Landowner Arrested for Impeding a Hunt

In April 2021 Eddie Fletcher heard the loud barking of hounds close to his house on his wooded property in Greenbrier County. Fletcher quickly ran to the sound. Four snarling hounds were tearing on a bear cub. Fletcher tied up two of the hounds, using his belt and a shoe string, and getting dog-bit in [...] 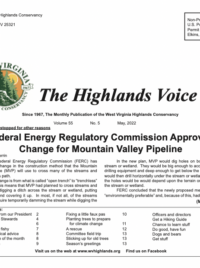