Cutting down the trees to save the forest

By Olivia Miller  A project proposed by the United States Forest Service to clear cut 3,458 acres of older-growth forest stands in sections of the Monongahela National Forest in Tucker and Preston Counties, referred to as the Upper Cheat River Project, has raised concerns with citizens of the local community and West Virginia conservation groups [...]

October, just like every other month was once again very busy at the Conservancy as it was for all of the organizations within the environmental community. For the Conservancy, among other activities, it was another wonderful Annual Fall Review. This year once again was packed full of presentations and activities starting with the in person [...]

November 2020 represents another milestone: Bob Marshall has served as the West Virginia Highlands Conservancy Treasurer for 20 years. Congratulations and a big thank you! The November 2002 issue of The Highlands Voice reported that “Bob Marshall has volunteered (more or less) to serve as treasurer.” The “more or less” part is that it took some arm twisting by President [...]

Goodbye from John  As many of you already know, this will be my last issue as editor of The Highlands Voice.  This month our new editor, Olivia Miller, and I are doing it together.  Next month she will be ready to solo. Solo, of course, only refers to the editing part.  The Voice has always been a collaborative effort between me [...]

The WVHC Legislative Committee will closely follow all bills as they are introduced in the January 2023 regular legislative session to understand their impact on West Virginia public lands. The session will kick off the second week of January and will continue for 60 days. In a typical year there will be thousands of bills [...]

By Hugh Rogers When our reports on the Corridor H highway project began appearing as a bimonthly feature, perhaps inevitably they became more technical, more insider baseball.  So for the September inning, manager-editor John McFerrin sent himself to the plate. With “Corridor H for Dummies,” he gave readers history and context for the current dispute.  [...]

By Sarah Hinnant This October, the West Virginia Highlands Conservancy welcomed Friends of the Cheat (FOC) board member Sarah Hinnant as a delegate to the WVHC board. Hinnant has served as an active member on FOC’s board for six years. As a Preston and Tucker County local, her appointment serves as a bridge between the [...]

Jay Williams gives a tour of the solar panels at his home in Cairo, WV. (Olivia Miller) By Olivia Miller and John McFerrin Members of the West Virginia Highlands Conservancy gathered at the newly renovated North Bend State Park lodge in Cairo, WV, for the first in-person Fall Review since the beginning of the COVID-19 pandemic. [...]

Traffic jam at Dolly Sods. (Dave Johnston) By Dave Johnston The month of October sees the greatest concentrated influx of visitors to the Dolly Sods area, and the Wilderness Stewards were out in force doing their part of supporting the wilderness in the face of the onslaught. Particularly on Saturdays, there is a near-constant flow of [...]

A White Bergamot in Leadmine, WV. (Paula Stahl) By Paula Stahl Deep in the hills of northern West Virginia is a small community called Leadmine. They changed the signs a few years ago to say, "Lead Mine," but before that, it was always one word. This community is interwoven with the Monongahela National Forest, with private [...]

(John Coleman) By Steve Coleman and John Coleman You would think the U.S. Forest Service (USFS) would be at the forefront of combating climate change. It’s mission statement is to “sustain the health, diversity, and productivity of the nation’s forest and grasslands to meet the needs of present and future generations.”   As owners of a farm surrounded [...]

By John McFerrin For the first time in a long time we crawled out of our little Zoom boxes and had a meeting in person. The meeting featured some new faces. First, we had Olivia Miller, the new Communications Director. She will take over the editing of The Highlands Voice as well as manage other aspects of our communications [...] 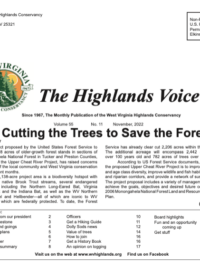