By Perry Bryant       The US Senate has historically been the place where climate legislation has died: cap and trade legislation in 2009, the Kigali Agreement phasing out hydrofluorocarbons, etc. Not this time. The Senate passed and President Biden has signed into law the Inflation Reduction Act (IRA), providing almost $370 billion in funding over the [...]

August in the highlands has seemed a lot cooler with more rain than usual. The WVHC committees are hard at work on issues before them and I want to extend a big thanks for their time devoted and the resulting progress. Seems like the issues just keep multiplying as they try to keep ahead of [...]

By John McFerrin             As part of the deal that resulted in the Inflation Reduction Act, Senator Manchin insisted that permitting of infrastructure projects be fast tracked.  The result was a side agreement that would direct agencies in charge of permitting to speedily review and approve applications for permits.  The summary of the side agreement provided by Senator [...]

The Federal Energy Regulatory Commission (FERC) has granted an extension of time for the completion of the Mountain Valley Pipeline to October 13, 2026.  The authorization to build the pipeline had been scheduled to expire in October, 2022.             As reported in the August, 2022, issue of The Highlands Voice, several groups, including the West Virginia Highlands Conservancy, [...]

The Pittsburgh Climbers calls out a final “Off Belay”

Are you concerned about the energy crisis and climate change?  We are too.  As we move away from fossil fuels, like oil, coal and gas where will our power come from?  Nuclear? Hydrogen? Solar? Wind?  How can we learn about more sustainable energy options?  Why not start by coming to the WV Highland’s Conservancy’s Fall Review.  We will gather at North [...]

Coal Fields to Solar Fields: The Nature Conservancy to Present at Fall Review

By Susan Rosenblum Eriks Brolis, Director of Nature & Economy Programs for The Nature Conservancy (“TNC”), will present on TNC’s Solar on Mine Lands Initiative at the Highlands Conservancy Fall Review, October 14-16, 2022 at North Bend State Park.  In an article on TNC’s website: ”Mining the Sun: How Nevada and West Virginia are Reclaiming [...]

By Hugh Rogers             In Tucker County, advance men for the Division of Highways (DOH) have been saying that a Northern Route for the Davis-Thomas section of Corridor H was never more than “a crayon mark on a map.”             Yet once upon a time, as recorded in the 2007 Environmental Impact Statement, the DOH had a [...]

Whether the waters of prosperity have actually flowed down the rivers of concrete of the Appalachian Regional Highway System, as Senator Byrd predicted, is a complicated issue.  There will always be debates about who was hurt, who was helped, whether the money could have been better spent in other ways, etc.   What the Appalachian Regional Highway [...]

By Dave Johnston During August the Dolly Sods Wilderness Stewards were all about seeking solitude (or lack thereof) and finding campsites, without staying in them. Let me explain. Solitude One of the key values of wilderness character cited in the Wilderness Act is an “outstanding opportunity for solitude”, and wilderness land managers must regularly monitor [...]

By Cory Chase The Highlands of West Virginia hold many treasures. One the most diverse–and least understood–is the world of fungi. Modern research is revealing the intricacies and importance that fungi play in ecosystems the world over. Our third outing for the year had over 35 people in attendance, mostly due to the well-deserved fanbase [...]

By Larry Thomas As Cory and I mentioned in the August Highlands Voice, the Conservancy has revived the outings, with three of the four planned outings completed and one remaining for 2022. We also have a revised plan for outings for 2023. The second outing, which I’m talking about below, was the Watoga Old Growth [...]

And So I Weed

By Jackie Burns It’s August.  In Canaan Valley that means it is time for pulling out Japanese stiltgrass (Microstegium vimineum) so that it doesn’t become the problem here that it has become elsewhere.  It’s a warm evening, just after a rain and about an hour before it will get dark.  I have packed for my trip, which begins [...] 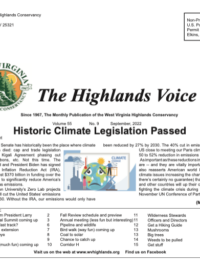