By Larry Thomas It is amazing how fast 2022 has flown by and it went out with a bang as temperatures in much of the highlands dipped below zero accompanied by strong winds creating extreme wind chills for close to a week. I hope that despite the harsh weather conditions that everyone had an enjoyable [...]

(Photo by Steve Taylor/University of Illinois) WASHINGTON — On Nov. 29, 2022, the U.S. Fish and Wildlife Service announced a final rule to reclassify the northern long-eared bat as endangered under the Endangered Species Act (ESA). The bat, listed as threatened in 2015, now faces extinction due to the rangewide impacts of white-nose syndrome, a [...]

(Photo by Moritz Kindler/Unsplash) By John McFerrin Whenever there is discussion of capturing more sunshine to make electricity, someone always points out that doing that on the scale necessary to operate an entire power grid would take a tremendous amount of land. They make calculations, talk about farmland that would have to be covered in [...]

WV Parks System is Worth Protecting

By Robert Beanblossom West Virginia has always been a relatively poor state with an economy largely based on the extraction of natural resources — especially coal. Consequently, the state government has historically struggled to provide its citizens with even the most basic of services. Even today, West Virginia consistently ranks near the bottom whenever any [...]

Heads Up! WVHC Is Going Digital

By Cory Chase, Program Director The West Virginia Highlands Conservancy has communicated with its membership through The Highlands Voice for decades, but there’s a new kid on the block. Since the Conservancy hired me (Cory Chase) as program director, Crys Bauer as membership and fulfillment secretary, and our latest hire Olivia Miller as communications director, [...]

It’s That Serious: A Collection of Comments on Corridor H

Corridor H construction in Holly Meadows, West Virginia, in Dec. 2022. By Hugh Rogers Since the partial settlement of a federal lawsuit allowed construction to resume on Corridor H, West Virginia’s Division of Highways (DOH) has spent its appropriations building west as far as Davis and east as far as Parsons. Meanwhile, as required by [...]

There Were No Flowers: Ethical Nature Photography

(Photo by Dave Johnston) By Dave Johnston Ever since the advent of photography, photographers have been taking and sharing pictures of the astonishing beauty of our natural world. Early photographers of the American West, such as Willian Henry Jackson and Carleton Watkins, influenced the establishment of our first national parks, and 20th century photographers like [...]

Will WV legislators put our drinking water at risk? Again?

(Photo by Steve Helber/Associated Press) By Olivia Miller On Jan. 9, 2014, an estimated 10,000 gallons of chemicals leaked from an aboveground storage tank into the Elk River through a tiny, one-inch hole. The steel storage tank sat upstream from the Kanawha County municipal water intake in Charleston, contaminating the water system that served nearly [...]

With the passage of the Inflation Reduction Act in 2022, the United States made a historic investment in farmers and ranchers to bolster the transition to climate-smart agricultural practices. The Inflation Reduction Act will direct nearly $20 billion toward agricultural conservation programs, opening the door for more farmers and producers to receive financial or technical [...]

The final day to submit comments to the West Virginia Division of Highways concerning the two remaining unfinished sections of Corridor H—the ten-mile section from Parsons to Davis and the 6.8-mile section from Wardensville to the Virginia state line—is Friday, Jan. 6 at 5 p.m.  Comments can be submitted online at http://go.wv.gov/dotcomment or by on [...] 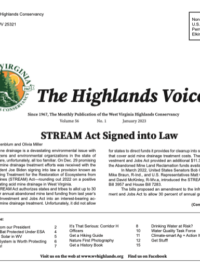